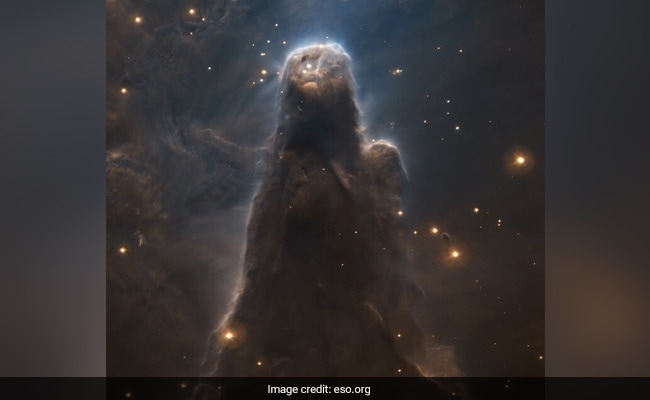 The cone nebula has a lighthouse-like shape.

A stunning image of a cone nebula in deep space has shocked astronomers. The image shows a strange figure in the vast universe that appears to be staring at us. The image has been released by the European Southern Observatory (ESO). The nebula is seven light-years long and looks like a lighthouse in infinite space. The photo was clicked by ESO’s Very Large Telescope in honor of its 60th birthday. The cone nebula is part of a larger complex 2,500 light-years away called NGC 2264, according to a report in Science alert.

According to the outlet, NGC 2264 is in the constellation Monoceros.

Unlike other nebulae, which glow brightly with a complex array of colors, this one is made up of thick dust that absorbs light.

This dark feature gives the nebula an eerie appearance of a humanoid figure.

“Its columnar appearance is a perfect example of the shapes that can develop in giant clouds of cold molecular gas and dust, known for creating new stars,” ESO said in the caption when sharing the photo.

What is Cone Nebula?

According to the US space agency NASA, it resembles a nightmarish beast that rears its head from the dark sea called outer space.

It is called cone nebula because of its cone shape in images.

Radiation from hot, young stars slowly erodes the nebula over millions of years. Ultraviolet light heats the edges of the dark cloud, releasing gas into the relatively empty region of surrounding space, creating this figure, the space agency said.

Featured video of the day

Exclusive: The chief of India’s Covid panel on hybrid immunity, threat of variants in China